Edit
watch 01:36
We're Getting Mutants in the MCU - The Loop
Do you like this video?
Play Sound

Yuuka Yano
Kotonoha Kanade (奏 言葉 Kanade Kotonoha) is one of the supporting-main characters in all incarnations of Rikei ga Koi ni Ochita no de Shōmei Shite Mita. She is a 4th-year undergraduate at Saitama University who helps Ayame Himuro and Shinya Yukimura. While she often has no idea what’s going on with them or why they’re acting so strangely, she's usually happy to help. She tends to seesaw between excited and insanely frustrated based on how much normal emotions and rationale versus convoluted “logic” are favored in the situation that she happens to be in.

Kotonoha is a young sweet woman with shoulder-length light rose hair that is tied in a ponytail with a gold flower hairpin on the left side and blue eyes.

She usually wears a lab coat and school uniform-like skirt.

Kotonoha's love for mathematics and puzzles made her develop feelings for her teacher in high school, compelling her to study even hard to get his attention. Following her math love, she decided to continue studying in the Information section at Saitama University's Science and Research department.

She often can't understand what Shinya Yukimura and Ayame Himuro (Kotonoha's co-workers) are doing and they usually get mixed in their love experiment. But as they misjudge/misinterpret situations and fail to see the obvious, she will use the moment to sneak out and not get caught up in their arguments and thoughts. Even though she often can't understand them, she would be happy to help them if they need her.

Although this changes later, at the start of the series she has a very strong need to "be normal" or to be at least seen as normal by the people around her. This goes to the point where she will hide her true feelings and opinions to please the people around her. As such she has gained the ability to "read the room" very well and can adapt to how she feels like she has to behave, very well. This facade does occasionally slip though, usually when she is with people that she trusts like Ayame Himuro and Shinya Yukimura although she will try to behave normal immediately afterwards. This is implied to be the case because she has been an outcast in High school and an incident regarding her teacher Keisuke Takahashi has been explicitly shown as an example of her feeling that way, as well as her parents and classmates reinforcing certain stereotypes on how to be normal and ridiculing her and others for not conforming to those stereotypes.

Kotonoha came to work at Saitama University and as she entered she greeted Shinya Yukimura and Ayame Himuro, but as they were too busy and excited about their love experiment, they didn't even notice her at first. Hearing their conversation and experiment, she was a bit shocked at what they were doing. As they later explained the situation and asked her how does she loves someone, Kotonoha showed them a manga with kabe-don situation and told them that her heart rate increases in such moment. Hearing that they conducted a kabe-don experiment, but once they starting included other hypothesis, she decided to make her leave and let them in their experiment.

On the next day, Kotonoha was coming to the lab and thinking that everyone already is working there, she found Ena Ibarada asleep on the couch and knew she had spend another night playing video games. She put her lab coat and started working, but upon noticing Shinya and Ayame having some sort of trouble, she checked if she can help them. Seeing their graph, Kotonoha realized that Ayame just started to get used to the kabe-don and that's why her heart rate decreased. But as Shinya and Ayame started thinking it was due to kabe-don being do so often it looked like a sumo move, Kotonoha quickly decided to leave them again.

Kotonoha tried to keep working, but Ayame approached her and asked if she had decided her the theme of her research. Kotonoha considered it to be an optimization problem solving or some puzzle and then recalled how she loved being around her math teacher and likely due to him started to study science. Shinya used the conversation for data and wanted Kotonoha to continue explaining her love interests in attempt to find connection to Ayame's love. But Kotonoha got ashamed and as Ayame interrupted them, she used to situation to get away again.

Later Ayame was chasing Shinya and Kotonoha helped her catch him and tie him up. As their co-worker Ena joined their conversation, she made all of them part of Shinya's experiment and him touching each of their heads and Kotonoha wondered how she ended up in doing that.

As Kotonoha continued her work, she got hungry and looked for Shinya and Ayame and saw them doing their cooking with love experiment. As she observed them, she agreed with Ayame that cooking with love makes the food taste better and she recalled how she cooked for her teacher. When she returned to study, she was feeling even more hungry, but then Shinya with Ayame came and gave her a dish they prepared in order for Kotonoha to have the energy to keep working.

Keisuke was the math teacher that Kanade fell in love with in high school, which also got her to be interested in science.

Shinya is her senior in Ikeda's laboratory. Although Shinya is sometimes harsh with her, it's always for her own good, something she realizes even if it angers her sometimes. Still, they have a very good senior-junior relationship as he is very supportive of her growth as a person. Later on, when he saves her from being raped by some delinquents, he saves her without a second thought, getting hit in the process. That selfless action made Kotonoha fall in love with him, a fact revealed by Ayame. 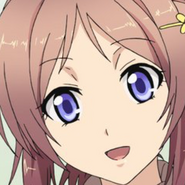 Kanade as seen in the anime 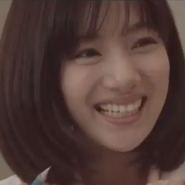 Kanade as seen in the film
Community content is available under CC-BY-SA unless otherwise noted.
Advertisement