Nana Asakawa (Live Action)
Himuro Ayame (氷室 菖蒲) is one of the two main characters of all incarnations of Rikei ga Koi ni Ochita no de Shōmei Shite Mita. She is a 1st-year post-graduate science and technology researcher at Saitama University. When she falls in love with Shinya Yukimura (Ayame's academic rival), she embarks on a mathematical and logical journey with him to prove this love when he demands such proof.

Ayame is a very beautiful young woman with hip-length lavender hair that has a small ponytail tied in the back with bangs hanging on the left side while she has shoulder-length hair strands hanging on either side and tucked behind her ears, light blue-green eyes, full pink lips and quite large breasts.

She wears a white lab coat with a official/business shirt, dark gray skirt with long dark stockings and she (usually) wears oval-shaped glasses.

Similar to Shinya Yukimura, Ayame has a serious look all the time and she is extremely logical person that she loves doing mathematical and logical experiments and after confessing her feelings for Shinya, she started making experiments in order to scientifically prove her love. As she doesn't have love experience, she can like Shinya, misunderstand situations and interpreted them in different scientifically way. Also due to her love inexperience, every time she is close to Shinya, thinks about him or even sees him, she can easily feel embarrassed and blush.

Ayame can be snarky, but is usually serious and logical above all else, making her stick to her quest above all else. Despite her scientific attachment, she carries a level of self-awareness & common sense comparable to the average citizen.

One day at the technology research department of Saitama University, Ayame confessed to Shinya Yukimura (Ayame's co-worker). As Shinya had not experienced love, he wanted a definition of love and prove of how Ayame decided that she loved him. Since both loved their jobs, they agreed to make an experiment in which they will try to find proof if they love each other. They started collecting data and did a kabe-don experiment, to get data on the increased heart rate of Ayame. As the experiment wasn't enough to get full data and she started to get used to the situation, her heart rate started to get lower, so they tried increasing the heart rate of Shinya and Ayame tried to stimulate him with letting him touch her head. But then a co-worker named Ena Ibarada brought to their attention that their experiment isn't correct and there are variety of reasons someone to get increased heart rate outside of the person being close to their loved one. They involved in the experiment Ena and Kotonoha Kanade, but concluded that his heart rate increased from all. Shinya then confessed, as he wasn't in much contact with other women, he gets nervous when is close to them, but Ayame was upset he got excited from all the women.

Later they did a cooking experiment, to see if you can implement love into cooking. As they were preparing the dish, Shinya was getting annoying the recipe wasn't numerically specific and had things like "a bit of salt". Ayame then explained him the two versions of implementing love into cooking, one that changes the taste and one that works visually for a psychological effect. Shinya didn't understand it and didn't believe that love will make the cooking taste better and wanted to even use a taste sensor to compare the data. But Ayame explained him that it will depend on the person and suggested she cook it and he experience both dishes. She calculated all the nutrition he would need and prepared a dish that would give him energy. She then served him two dishes, one presented with having his name written with a heart and he had to agree that one tasted better, even before tasting it. And she agreed as this was the way she infused "love" into the cooking. 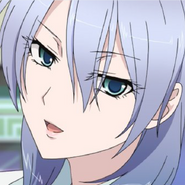 Himuro as seen in the anime 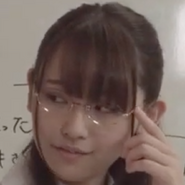 Himuro as seen in the film
Community content is available under CC-BY-SA unless otherwise noted.
Advertisement